I recently had the pleasure to be the coach once again for the Ontario Summer Games (OSGs), this year was held in Mississauga Ontario. This year was special for the athletes because it was the largest Ontario Summer games in history, awarding over 2000 awards in total. This year’s opening ceremonies were very cool, it reminded me of when I went to the Canada Winter Games. The athletes entered into a whole arena full of fans cheering them on, and they had a bunch of live entertainment. The opening ceremonies were even streamed for the first 45 minutes.

This year was also a big year for the archery event as well, for this was the first year that they change the OSG format. This year they decided to shoot two 720s the first day and the second day shooting at 720 with a round robin of matchplay and match set. Archery lingo inside, basically it means instead of shooting three distances they only shot one distance the three days. I personally think that the exposure to match play and set would be beneficial for future athletes because the tournament type would be like international events (e.g. olympics).

The tournament was an eventful year for the Eastern zone, it was definitely full of experience that these athletes will learn from and remember for the rest of their lives. They learned how to shoot in; high winds, high humidity, heat, and down pouring rain with chances of thundershowers. They learned the importance/how to keep equipment and scorecards dry. We were very fortunate to have found some towels and a laundry card that we can dry the equipment with, thank goodness I brought a hair dryer for all the shoes.

This year the committee decided that to make sure that all the athletes had a chance to experience the matchplay and match set they decided to do a round robin. Traditionally match play and match set are done in a single elimination format (or double elimination rounds if you’re in Canada). The archers seemed to really enjoy a different shooting format, after understanding the rules for the match play and match set. However, by the end of the day all the archers were completely exhausted by the end of the day.
As a coach I was completely ecstatic with the results, after all these athletes had faced challenges that most had never faced before (e.g. equipment failures, whether, or even being independent from their parents). Eastern zone did fantastically well taking home a large portion of not only the 720 medals but also for the round robin medals. The results are posted on the OSG and the OAA websites.

I hope I have the pleasure to be the coach for the Eastern zone in the 2018 OSGs in London Ontario, and if I’m super lucky I get to see these kids again.

For all my eastern zone archers that are reading, it was a pleasure to get to know you and to shoot with you.

Almost everyone knows that students need to work during the summer to help pay for school; I am not special. Once school finished I started looking for a summer job to help me pay for my education too, however getting that job has not been very easy so far. Since I am studying Kinesiology, I was hoping to get some work experience in a physiotherapy office or something similar. I have applied at several places but have had no luck yet.

Since,  I am a certified NCCP Intermediate level archery coach, I thought in the meantime I could continue to coach during the summers or whenever I had free time. So far, I have been doing a lot of advertising like making business cards and posters, to help promote archery lessons. Hopefully I’ll soon have some students sign-up for lessons. I love teaching everybody about the sport of archery, helping students improve and learn to love the sport as much as I do.

I also have been tossing the idea around about doing private lessons online (via Skype, or video chat). I remember getting comments from a couple of followers that they do not have a lot of coaching options. Although, I can only offer lessons in English, if anyone is interested in trying coaching over the web, please let me know. We can setup a lessons and handle payment through Paypal.

As I mentioned in my last blog, there were about seven students in total, which is the most amount of students that I have personally coached at once. Introducing archery to Leahurst College students was a lot of fun. To teach that many students with only one hour for a lesson, I needed to make sure everyone had their own bow. Luckily, I had several bows, so the number was not a problem. The challenge I experienced was where to store them until the lessons and where to store them during lessons as I did not want lying in the grass. Solutions: Basement Ceiling Storage – Two T-Bars Storage from Dollarama ($3 each) 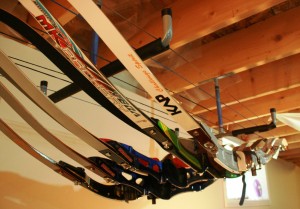 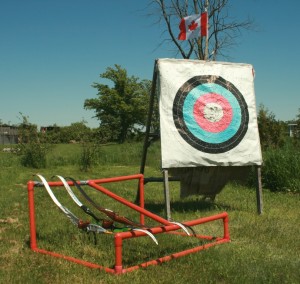 These are not ideal storage ideas for an official archery shop but if you have a lot of bows or give lessons they are good solutions for minimal investment.

Leahurst College is a new Kingston high-school that just opened it doors in September 2013. As a new private high-school they started up with only grade 9 and have plans expand adding grades each year until they can accommodate grade 7 through grade 12 by 2017. The school is taking a very unique approach teaching advanced placement with very high academic standards while introducing hands-on learning through practical application and experience. My younger brother Joshua was given a unique opportunity to attend and is enjoying it very much.

As part of their practical application, they visit universities, research facilities, try different sports like rowing, rock climbing, slack line etc…. With this in mind, on Wednesday, I was given the opportunity to introduce archery to all of Josh’s classmates. One of the reasons, they wanted to introduce Archery was because Josh became the school’s first competing athlete, when he attended Ontario OFSAA championships in Toronto.  The school wanted all his classmates to understand and appreciate what it takes to not only shoot archery but to compete.

We covered the basic 10 steps of archery, safety, basic tournament rules, and some physics of archery. The students had a lot of fun in the sun shooting arrows in to the target. They all started at 5m working their way to 15m for about an hour.  At the end of class, they sat back and admired as Josh shot from 45m.  I believe they all now have an appreciation for the level of skill and consistency Joshua has developed in the sport. Little did they know, this was all with his indoor setup and feathers vanes.

There were about seven students in total, which is the most amount of students that I have personally coached at once but, it was a lot of fun. They even talked to me about doing another group lesson in the future and the possibility a Leahurst Archery club that could attend OFSAA in the future. Leahurst’s students are currently doing exams, and I want to wish them all the best of luck and I look forward to teaching them in the future.

In case you missed them…