For this worldwide event, 400 athletes and their staff from 42 different nationalities coming from the 5 continents are awaited. During 6 days, these archers will excel to offer the 12,000 spectators the greatest show ever, with the help of the 180 friendly mobilized volunteers. Read More… 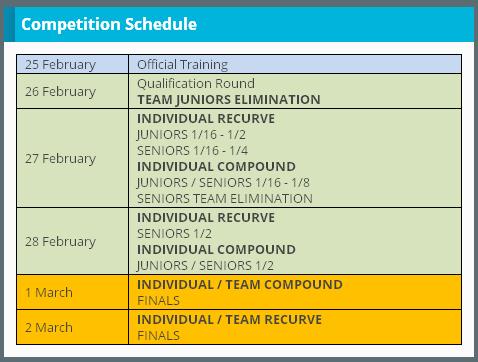 All this week, from February 15th to February 23th, clubs across Ontario are hosting the mail-in scoring tournament. The 10-ring target championship is an indoor FITA tournament and is the standard format for the Canadian National Indoor Championships and all World Indoor Championships. The tournament follows standard FITA rules using a 10-ring 40cm target ( 60 cm for Cub and Pre-cub Recurve) with two rings each of Gold, Red, Blue, Black and White and everyone shooting from 18M. Consistent archers may choose to use a vertical 3 spot to avoid breaking arrows and nocks.

Yesterday, I shot in my 9th Provincial Indoor 10-ring Target Championship. Although I have not always won a medal, I have always enjoyed it and this year was no exception. Being away at university and focusing on my education and career development, I was unable to participate in the Provincial Indoor Field Championship. That aside, I have been able to train. Redeemer has been extremely generous to afford me the gym a couple of days a week to train and practice. I have been fortunate enough to be able to co-ordinate some virtual training time with my awesome coach Kathy Millar via SKYPE. That aside, archery is a social sport and although it has been great to keep shooting, what I really missed was shooting with sister, my little brothers (both who are not little anymore) and my archery family. I had a lot of fun shooting, joking around and spending time with my family and friends.

If you live in Ontario and have never competed in an indoor target championship, check out the Ontario Association of Archer’s website for host site and dates near you. Hurry as pre-registration is usually required. 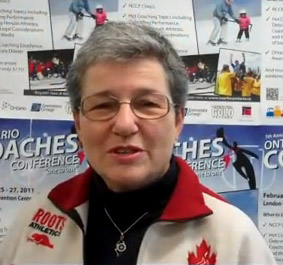 Canadian Archery coach Joan McDonald (Richmond Hill, ON) was one of a number of Canada’s top coaches that were honoured at the Petro-Canada Sport Leadership Awards Gala, hosted by the Coaching Association of Canada (CAC), this past weekend in Calgary. McDonald was a recipient of the Petro-Canada Coaching Excellence Award. This prestigious award recognizes coaches whose athletes have excelled at World Championships, Olympic and Paralympic Games and the Special Olympics World Games.

McDonald is the personal coach of Crispin Duenas (Toronto, ON), who won the bronze  medal in the Men’s Recurve Bow category at the 2013 World Archery Championship in Belek Antalya, Turkey (September 29th – October 6th). The bronze medal marked the first time in 42 years that Canada had finished on the podium at a World Championship in the Men’s Recurve individual category.

McDonald has been personal coach to Duenas for the past 13 years. She is also the founder and Head Coach of the Bullseye Buccanneers Archery Club in Richmond Hill, Ontario.  McDonald has been instrumental in the development of Duenas as an archer from the ‘Learn to Shoot’ stage of Archery Canada’s Long-Term Archer Development (LTAD) model through to the ‘Shoot to Excel’ stage. “Joan’s confidence in my abilities and her keen attention to the coaching of the technical and psychological aspects of archery, have led to my steady progress and success at the national and international levels”, said Duenas.  “I have no doubt that without Joan’s coaching and guidance, I wouldn’t have been on the podium at Worlds. I’m also sure that under Joan’s continued coaching, I’m on the path to a long and successful career as a high performance archer.”

“I’m thrilled and honoured to have won this prestigious award. Crispin is a tremendous young man and athlete with lots of potential”, said McDonald. “My sincere thanks and appreciation to Petro-Canada and the CAC.”  Archery Canada

Canada finished the 2013 World Youth Archery Championship in Wuxi, China on a high note as the Men’s Team in the Cadet (age class) Compound Bow category won the silver medal. The Canadian Team, comprised of Hunter McGinnis (Winnipeg, MB), Logan Kupchanko (Regina, SK) and Tyler Murphy (Fredericton, NB), faced Turkey in the gold medal match on Saturday. After building an early lead, Turkey prevailed in winning the match by a score of 224-218. Kupchanko followed in the footsteps of his older brother Michael who was a member of the Junior Men’s Compound Team that won the gold medal for Canada at the 2011 World Youth Archery Championship. Read More…

Congratulations Hunter, Logan and Tyler and to the entire Canadian team.

This weekend, York County Bowman in New Market Ontario hosted the Ontario Provincial Field Championships, a two-day IFAA tournament with field round the first day and a hunter round the second day. IFAA field tournaments differ slightly from FITA field tournaments, besides being in yards not meters, there are stations with walk-ups or fan shooting and hunter includes odd distances like 53 yards and 20 feet.

I really enjoy shooting in field tournaments, they are just pure fun. Walking through the bush shooting at various size targets from various distances. You shoot up and down hills and over streams with the opportunity to shoot in various stances, on rough ground and at various angles to the target. This year, it was a great opportunity to shoot and practice angles in preparation of the upcoming National Field Championship in Victoria British Columbia next week. 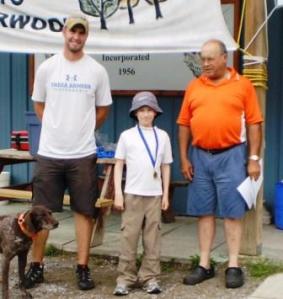 It also marked the first outdoor tournament for my youngest brother Cole who is nine.  Being the youngest of four, it has been a challenge for him living in the shadow of his older brothers and sisters. He has always wanted to do things that we are doing.  Earlier in the year, he shot his first indoor tournament however came up just short of medaling. This time he would not be denied, it was a lot of walking for him however it was all worth it when he received his Gold medal in the Pre-cub recurve division.

Last week, I competed in this years’ Canadian National 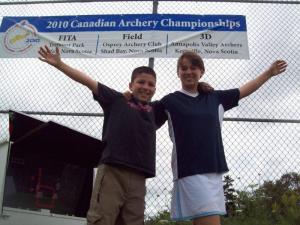 Archery Championship held in the very scenic Halifax, Nova Scotia. The target championship consisted of a double FITA Star competition for the first 4 days. Target rankings from this event setup the Canadian Open (formerly FCA Open) which is a one-day double elimination match play event. Lastly, I competed in the Field Championship for the final two days.  Here are a couple of links to picture slideshow of the events.

The tournaments had a variety of weather including blazing heat, rain and high winds with gusts up to 50km/h. The tournament was a great learning experience and also a lot of fun. This year I was fortunate to bring home the bronze in both the Target Championship and Canadian Open and win the silver in the Field competition. I also received my FITA 1100 pin during the target championship and I am getting closer to my 1200 pin everyday. 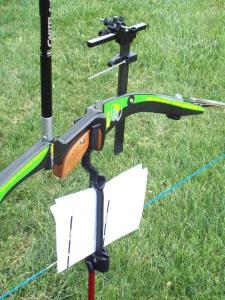 During the target championship, I discovered a neat use for the extra arm on the Cartel RX-10 bow stand. Because of the high winds, I stored my bow in the stand in the traditional way with the stabilizer-pointing straight up so it would be less likely to tip in the high winds. This allowed me to use the extra arm to store my scorecards securely as illustrated in the picture. The arm can also hold a towel in the rain or your hat while you are shooting. These are just some more reasons why everyone should consider purchasing the new Cartel RX-10 bow stand.

In case you missed them…