For the first time in my competition history, I shot while I was extremely sick and learned a few things about competing while you are ill. For the field championship, I was not too bad and just felt a little queasy but was able to hold it together enough to win the silver medal.  Unfortunately, for the target championship I was completely sick and nauseated. For the first day of the Target Championships, I was so sick I almost passed out while shooting, however I stuck it out and managed to complete the shooting day in 5th place. Day two of shooting, I was feeling a bit better and shot very well however I was too far back to make it to the podium and end up fourth. Feeling better still on day five, I competed in the Canadian Open and won the B division title. 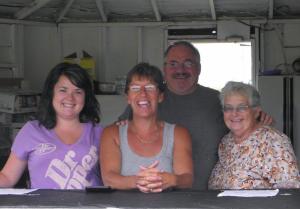 I have to give some of my little successes to the Canteen run by Leonard and Faye Mooney who also run the cafeteria in Delisle Composite School. Along with Helen (Grandma) and Amanda Radford they made beef soup special just for me on site and even gave me some orange juice from their personal camper to help me gain some of my strength and continue through the competition. This type of hospitality is not easily found and I cannot thank them enough, besides the food was amazing and affordable. The next Championships which are to be held in Victoria, British Colombia and should take note and invite them to provide food for the athletes near the field of play.

This year I learned some valuable lessons about health and shooting, something that every athlete needs to experience; how to maintain you strength and composure while sick during competition, but that will be another blog. I want to give my coach Kathy Millar a special thank you for helping me through and making sure I stomached some beef broth and orange juice to complete the competitions. The value of a great and caring coach cannot be measured.

1 thought on “Returning from Delisle”