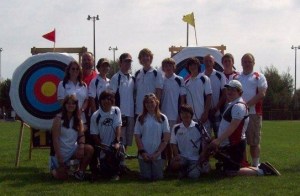 I have just come back from the Ontario Summer Games (OSG) in Sudbury, Ontario.

The OSG’s are like a mini-Olympics for Ontario’s top athletes under the age of 21 with over 50 events including such sports as Athletics, Lacrosse, Swimming, team sports like basketball and of course Archery. Sixty archers qualified from all over the province of Ontario representing the five different zones (Central, Eastern, Western, North East and North West) and competed in the two-day event.  The OSG archery event includes two Canadian 900 rounds which is 30 arrows shot at each distance of 55m, 45m and 35m each day.

As part of the Eastern Zone Archery team that won a total three metals, I was honoured to come back with the Gold medal in the Cadet Female Recurve division.

A special thank you goes to the Empire Life Insurance Company who very quickly and graciously provided team shirts, when at 4pm the day before we left, the Eastern Zone Archery team was informed our team shirts “fell through the cracks”. Without team shirts, our team’s participation was in jeopardy, since the rules require us to have team shirts to compete. Although I know it is not within Empire Life’s company policy to sponsor sports teams, it was their assistance that helped us walk into the opening ceremonies proudly wearing awesome team shirts and representing Eastern Ontario.